Challenge Roth started off with a bang.

Actually, it was a bark.  Excitement and nerves had me awake long into the night.  I awoke to my husband shaking me to get up and move it.  One alarm was set for 3:45 am (apparently hubby turned it off) and another for 4:00 (apparently I set it for pm). Our departure time was set for 4:30.  A barking dog woke him up and it was 4:15. We had 15 minutes to get on the road.  I think I was too much still asleep and too rushed to get going to even start to panic about such a rush.  Every athletes worst nightmare- sleeping through the alarm. Oh boy.

I guess good preparation the day before made getting out the door in this short time possible.  Threw on the clothes that were piled on the floor, got the peanut butter/almond butter on toast sandwiches ready as well as the morning UCAN.  Water bottles ready and morning bag ready.  The only thing I didn't get to do was sit to let nature take it's time. TMI I know but it is a fact of life for an endurance athlete.
We planned to ride the shuttle to the swim start and had booked a ride on the 5:00 am shuttle that left from a school about 5-10 min away from the expo/finish area.  We needed to push the speed a bit (thank goodness for the no posted speeds for some highways) and managed to arrive with 2 minutes to spare.  Thank goodness we also checked out the shuttle pickup area yesterday and set the gps destination for it.  We rushed to where others were standing asking if it was the 5:00 line or the 5:20 line.  A sigh of relief to hear they were waiting for the 5:00 shuttle.  The shuttle was free but you did have to sign up ahead of time and wear the bracelet to get on the bus and it was not interchangeable with another time.  The bus was actually almost 15 min late and the rule of riding during your time slot only flew out the window as folks from both the 5 and 5:20 time were boarding. 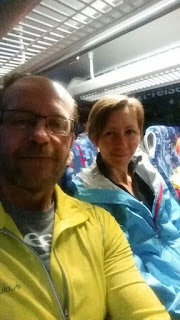 Excitement grew to a bit of worry as we passed miles and miles of vehicles waiting to get to the swim start.  Unless you want can be or want to be at the swim start at  4:30 or 5 at the latest, take the shuttle.  I can only imagine the panic for some of the athletes in those vehicles.  It would have taken a long time to get to the swim start and I can only assume some were late.  I was in one of the first wave starts 6:55 (after the pros took off) and I knew I wouldn't have a lot of time(30 min) to set up and get ready before my start.  Hubby's wave was at 7:50. 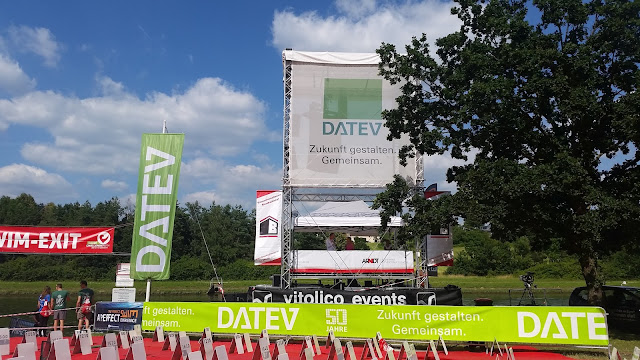 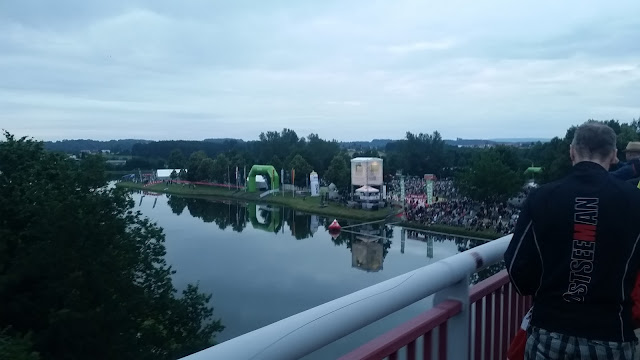 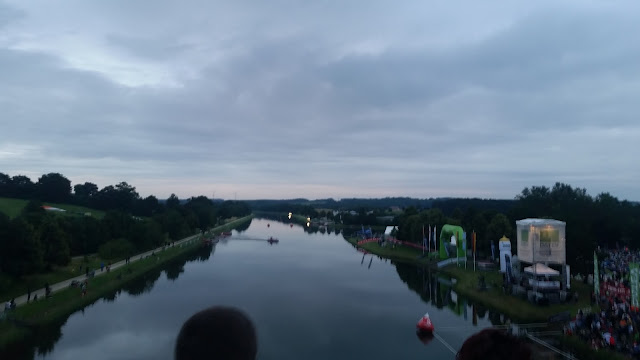 Off the bus and going as fast as we could to get through the tons of spectators and other competitors all looking for in way "in" at transition.  It was where the bike exit was and would have been a good thing to know prior.  With bike check in the day before, it was easy to navigate to where my bike was.  I borrowed a pump right away from a lady just down from me. 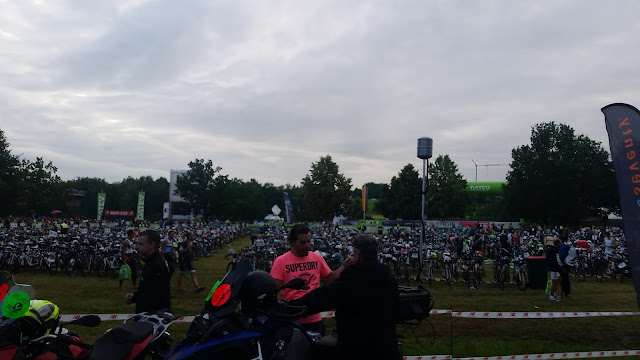 I decided to find the porta potty sooner rather than later.  They seemed a long ways away into the other bike section and there was a line up pretty long.  A lady passing by said there was no line ups around the corner at the inside potties.  I made a bee line over there and sure enough no line and no pressure to get in and out fast.  I like to take my time.  Embarrassing to admit but it's the truth.  It was a chance to calm myself down and regroup.  I was lighter after leaving in more ways than one.

Back at my bike, I got my nutrition on my bike, checked things out and then started to lube up with body glide.  I was asked if I knew how the tattoos worked and I proceeded to help a lady put her tatoos on with only a little water from someone else beside us.  I didn't mind but wondered why she didn't do that last night. 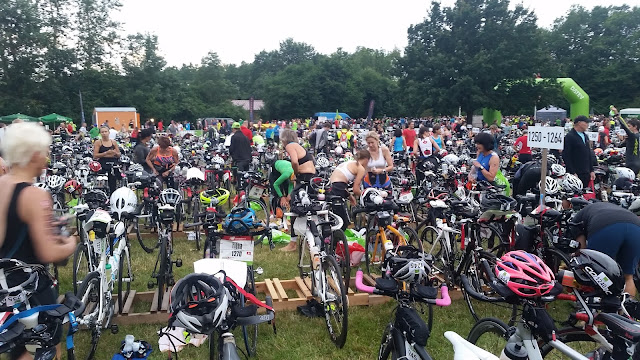 Heard my name called and roaring runner was at the end of my row checking out my spot.  I was getting my wetsuit on and drinking the last of the UCAN fuel.  I checked with him that he had his.  Last time he forgot to drink it.  I need him to keep me from full out panic attacks and he needs me to remind him to keep on top of his nutrition. 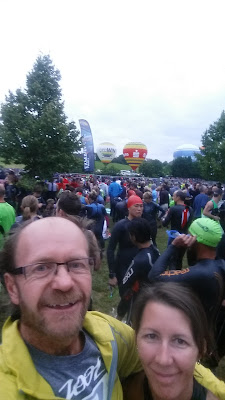 We walked to where the lines of waves were starting to assemble.  I dropped my morning clothes bag off. 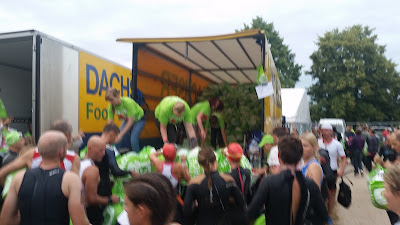 There was music playing and such incredible energy.  It is strange to have the announcer speaking all in German, not understanding a word of it and oddly, I seemed ok with that.  Porta potties were also in this area.  It was nice to have your swim wave number and time printed on the swim caps.  Made finding your wave easier.  I was in the second women's wave group.  There were only 2 women's waves and 11 men's.
The pros were off and the excitement went through the roof.  There were spectators many deep along both sides of the canal, along the bridge, pretty much everywhere.  I've never seen such support. Hubby stayed with me for a few more minutes then kissed me good bye, gave me lots of encouragement and left.  He said after that too many excited/panicy/crying women was hard on his nerves.
Soon, the wave before mine left and we were up at the edge of the water.  Waves were 5 min apart. 250 women in my wave and some were high fiving, some were hugging, some crying.  I made friends with as many women as I could- from all over the world, and for many of them, this was their first full distance triathlon.  This was very comforting for me being my first time with the long distance. Doesn't change the fact we all had 140 miles to cover that day but we sure weren't alone with our emotions.
When the horn blew to start the wave in the water, it was our turn to get in and swim out to the start buoys.  We had a couple minutes to get some water on the face, pee if you needed and find your spot in the pack.  Water was warm and I positioned myself on the outside edge of the canal.  I was told by someone who has already raced Roth that with the canal swim it is good to stay in the middle to outside on the way out and more to the outside on the return trip.  Especially for those in early waves.  Better current.  I was way less nervous than I thought I would be and soo excited to get started.
Hubby said it was really neat being in a later waves to see more of the beginning.  He saw all the hot air balloons (around 8 I think) go up, saw the pros come in and was apart of so much of the excitement.  Timing wise for him starting an hour later than I was, we thought we might be pretty close to finishing around the same time. 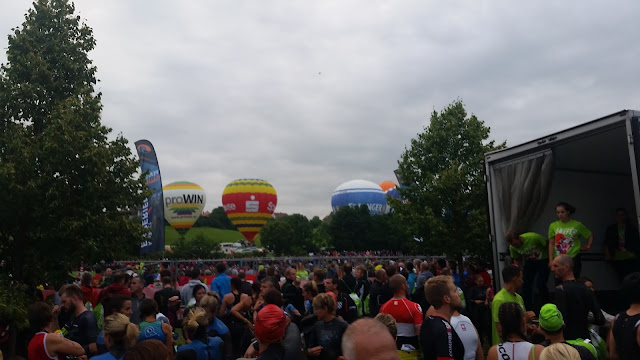 It was pretty easy to get into my rhythm early on and the only trouble I had was my goggles fogging a bit.  Dang it all, I wish I had an easy solution to this problem.  My swim path I imagine was very similar to an intoxicated individual walking the line.  My garmin showed 2.49 miles so wasn't too bad.  I didn't get run over or kicked but I did get too close to the edge of the canal and my right hand hit the side. It stung for the rest of the swim.
I never really saw if there was assistance by way of kayaks in the water and interestingly enough, there were no kayakers at the turn around point.  I heard lot of yelling and I looked up and on shore some people were yelling at me and pointing and I looked around to see myself alone and the turn buoy a little bit behind me.
Halfway back on the return trip was where things started getting interesting.  I was still dealing with impaired vision and now the wave of men that left behind our wave was catching up.  They were like a steam roller just plowing through, over and around all the ladies.  Even hugging the side like I was I was kicked, pushed, elbowed and swam over.  The swim wasn't quite as much fun from this point on. I found it hard to hold my ground.
The swim course continued past the start point, under a bridge to the turn around point a few hundred yards beyond.  Couldn't see much now through the goggles and getting a bit ready to find the end.  All of a sudden my head runs into something solid and an arm lifts me up and there I was at the swim exit.  WooHoo

I ran and picked up by bike bag and headed to the change tent.

The change tent was full and there was a couple ladies just before the entrance so I stopped there to change.  No matter how warm the water is, after a long swim, a couple minutes after exiting the swim, I start to shake uncontrollably.  I was a handful for these 2 ladies trying to help a shaking lady dry off, change shorts and put socks and shoes and arm warmers on.  I needed to sit for a minute as a volunteer doctored up by bleeding hand (from hitting the canal wall).
All the long distance triathlons I have been too so far have had separate change tents for men and women.  In Europe I guess they are way less modest or private as there is one change tent that serves all.  I have never had a full out change yet at a triathon and now I am faced with doing this around men and women.  I had a towel in my change bag and did try to use it to change discretely.  I know so junior highish.  It really wasn't as big a deal as I was making it to be in my head.  My husband had the attitude of "when in Rome."  He did say that he was surprised that both transition change tents were staffed with women volunteers.  Uh excuse me, I am having trouble with my shorts, can you help?

Well thanks to a 1:32:19 swim and a 10:56 transition, I was sent onto the bike course with help from some great volunteers and by the cheering and encouragement of more fans than one can imagine.