This was a tough ride.  Sometimes I still need to look at the finish line picture to remind myself it wasn't a dream; that I really did complete it.

The course was an out and back that left Rice Lake Wisconsin at 6 am with 3 checkpoints.  Ojibwa was at mile 45, Park Falls (the half way turn around) at mile 80, then back to Ojibwa for 115 miles to the finish at Rice Lake.  Lots of riding before any checkpoint.

Basically 6 hour ride the first 45 miles to the checkpoint 1.  30 min to dry the neckwarmer/jacket/change chemical warmers in boots/eat.  4 hours 45 min for the next 35 miles to the half way point with an hour there to eat/change clothes.  5 hours to cover the 35 miles back to Ojibwa where I spent 45 min.changing/fueling up.  Then 8 hours to cover the 45 miles back to the finish.  Though there was no designated checkpoint between Ojibwa and Rice Lake, a volunteer organization at the community of Birchwood (15 miles from the finish at Rice Lake) had a tent set up with cookies and hot beverages through the night and we stopped there for 45 min.

The long distances between the checkpoints was the most mentally challenging thing for me.  Especially once I was at checkpoint 3 and needed to get my head around another 45 miles to the finish when I was already tired.

Start time Saturday morning was at 6:00.  It was dark, a pleasant -15 C but very slippery/icy.  There was very little snow in the area.  It had rained Thursday with a sprinkle of snow in the evening.  The 160 mile runners left Friday morning and reports were that the trail was slush.  Temperatures were to drop from Friday to Saturday so all the slush and rain was going to be ice and ruts.  And indeed it was.  I fell within a couple miles after starting which only heightened my nervousness.  The bikers with studded tires would have a big advantage. I would take another spill 10 miles down the trail.

The first 15 ish miles had lots of hills, exposed rocks and uneven trail.  The community of Birchwood was at the end of this section where some riders stopped at one of the 2 gas stations for coffee or food.
The next 15 ish miles was nice trail.  Net downhill, away from the main roads through forest.
The trail then got tough until the checkpoint.  It appeared that a truck had drove down the trail while it was wet so there were 2 narrow ruts about 4-6 inches deep that took all the concentration I had to keep the bike upright in the rut.  Outside the rut was soft snow so it was certainly easier to be on the packed rut trail but took a lot of straight arm handling. 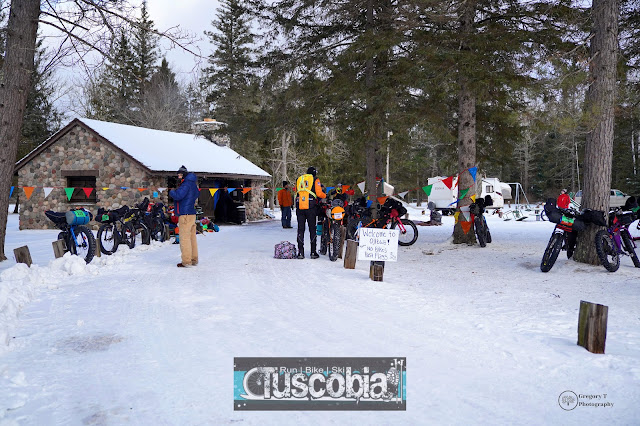 Ojibwa was an tarp enclosed outdoor cookhouse.  It was warm and cozy with tables and smiling volunteers ready to bring up some ramen soup or a hot beverage.  I took off my jacket, vest, neckwarmer and toque and hung them all on the line by the fire to dry out.  They weren't really wet just a bit damp.  Soup was delicious followed by a few cookies.  I put fresh chemical warmers in my boots but otherwise didn't change anything.
The trail from the Ojibwa checkpoint on for about 10-15 miles was perfect.  Packed, wide, pretty smooth for easy riding.  This was followed up with 15 miles of very soft trail with unpacked snow. Lots of traffic through this part as we met the 80 mile bikers and runners that started at Park Falls that morning and were heading to Rice Lake.  The final 5-8 miles until Park Falls had a good packed trail.  It was getting dark and we were anxious to get there.  Up until this point, any time we needed to eat or drink we stopped as trail conditions did not make eating/drinking on the go very conducive without taking a spill.  So as we approached Park Falls, I couldn't stop thinking of all the food I was going to consume.  I was so hungry!! 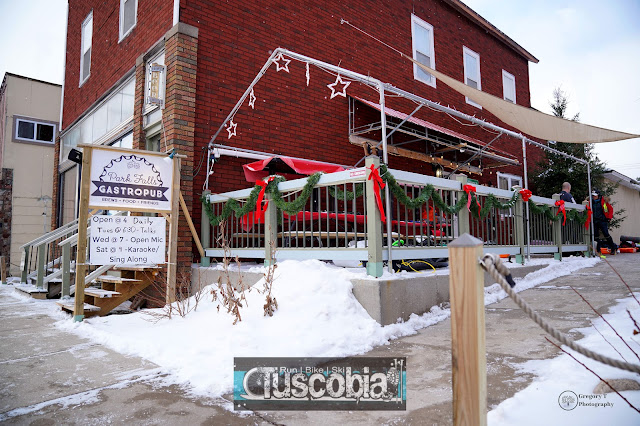 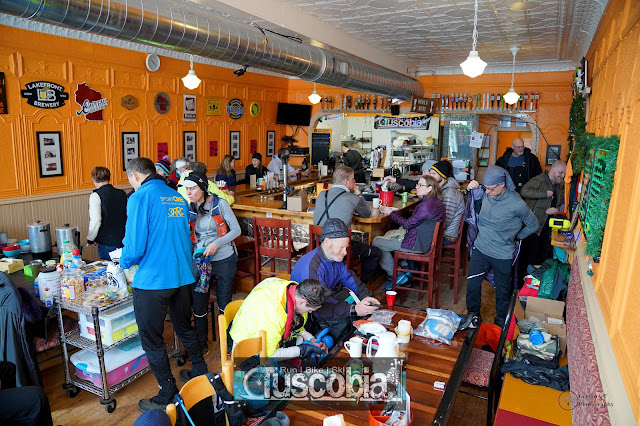 Chicken noodle soup, grilled cheese and hot chocolate was served to us at the Gastro Pub by amazing volunteers.  I scarfed down a donut before starting my main course.  And I don't even like donuts.  We filled our faces and met new people and visited around the table.  It was so nice to see a couple familiar faces and receive some encouragement from them.  Thanks Scott and Sue!
After eating, we grabbed our drop bags and went upstairs to use the bathroom and change clothes.  I had a full change except for my bike shorts.  A mistake to not have fresh shorts as chaffing and blisters were already formed on my inner thighs/ butt area.  I covered them with bandaids and hoped it wouldn't get much worse.  My clothing choices seemed really good up until this point as I thought I wasn't really wet or sweaty.  Slightly damp shorts would have contributed to the chaffing but unfortunately there were more players in the game.
After leaving Park Falls with a temperature of -12 C, we stopped a couple miles down the trail so I could remove a top layer and another biker caught up to us, stopped also and asked if he could tag along with us.  Introductions were made and the 3 of us stuck together until the finish. One of the best parts of doing events like this is meeting up and riding with other people.  It was really hard to converse while riding single file added to the noise of the bikes but we stopped frequently (20 min) to get a drink or pee or eat something.  At times, we walked/ran our bikes to chase away the sleepies.  The soft part of the trail was much more driveable now after being packed through the day.  We reached the well lit Ojibwa checkpoint at midnight to volunteers flipping pancakes, a warm fire and a packed tent.  Us 160 mile bikers had caught up to some of the 160 mile runners.  Lots of tired, happy people.  The outdoor biffy was cold on the butt and I knew I needed to increase my fluids.  I had only used the washroom at the checkpoints and no where along the trail.
Though we were 3/4 of the way, I was so overwhelmed by the distance yet to the finish.  Something was wrong with my bike set up (though I had changed nothing from what worked in the past) however a sore back had plagued me since around mile 30 and I knew my seat chaffing was due to me trying to sit more comfortably on the saddle to alleviate my sore back.  My right hip and knee were now both complaining very loudly and the thought of needing to withstand the constant pain for another 7 -8 hours seemed inconceivable.  I took a few walking breaks along the way as walking seemed to reset the hip and it wouldn't hurt for awhile again.  I also took a couple rest breaks.  I'm sure Mark (the rider with us) thought I was crazy but I just stopped, plopped my bike down and laid down on the trail with my eyes closed for a couple minutes.  Secretly, I think both Mark and my husband were feeling as tired as me, they just didn't admit it.  I am not as comfortable following especially in the dark.  I like to see everything and like a bright front light.  So the gentlemen with me obliged and let me lead for a lot of the 80 mile return trip.  I think it is harder on the eyes being in front, paying close attention to the trail, finding the right place to drive and watching for the ice spots but I was happy to be able to see more.
The good part about the return trip from Ojibwa to Rice Lake was the trail was in better shape than it had been on the outgoing trip.  More packed down, evened out.  But the ruts weren't nearly so bad.  At times I thought I was hallucinating, not sure what I was seeing ahead on the trail then all of a sudden a runner pulling a sled was there.  Thank goodness for the blinking red lights.

Reaching Birchwood was a monumental feat of victory.  The trail was slippery and though we had kept a decent pace up until this point, I was slowing down and the boys behind me weren't yelling at me to pick it up so I knew they must have been tired too.  The tent had a heater, homemade cookies and warm broth!  I was abruptly overtaken by spells of shivering to find after taking off my jacket that my 2 shirts were soaking wet.  I took one off and put on my puffy coat.  Socks were soaked too.  Also put on my down mitts and sat by the heater downing cup after cup of broth.  We were in no hurry to leave, enjoying the conversation with the few others there, resting and preparing for the final 15 miles that sounds like not much but in reality was still probably close to 3 hours of riding.

If possible, this section of trail that was hard going out seemed much worse heading back.  Very rough, so slippery, uneven and tons of hills. I worked hard to turn my mind off and concentrate only on a mile at a time.  Keep moving forward.
The final 4 miles was the only section not on the Tuscobia trail system but utilized local trails.  It seemed like it kept going on and on.  I have so often heard how the final few miles before a checkpoint or the finish seem considerably longer in mind than they are in actuality and it is true. 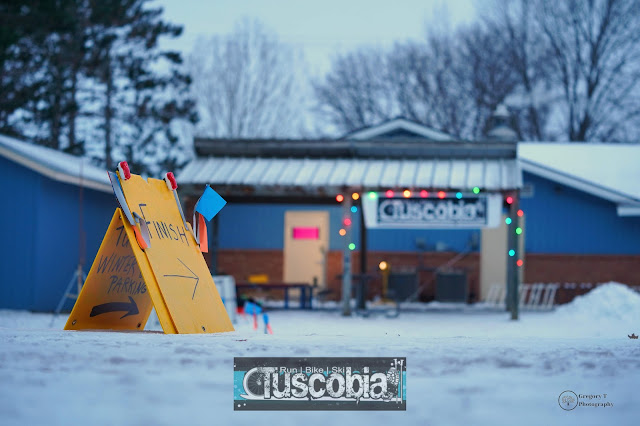 All of a sudden, I could see the parking lot where our vehicle was and I knew the hall was just in front of us.  Mark's wife was outside by the finish cheering for us and lining us up to take pictures.  It appears I didn't even have the thinking ability or the energy to turn my headlight off and take my goggles off. 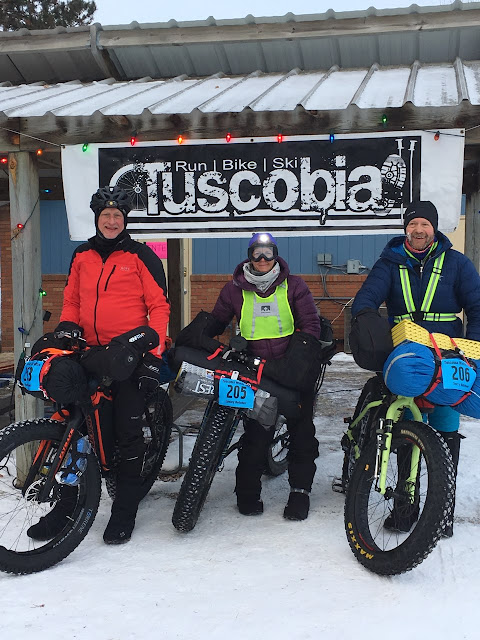 We were greeted and congratulated inside the hall by Helen, the race director as well as other volunteers and fellow competitors.  And it was over, just like that.

I was so thirsty and drank cup after cup of water.  We changed our clothes, unpacked our bikes and loaded everything up.

McDonald's pancakes were calling our name.


Many thanks to the race directors Chris and Helen for a superbly organized event.  Doesn't get much more personal than when a race director (Chris) comes past us on a snow machine at 4 am letting us know the Birchwood tent was 3 miles away.  Or when Chris and Helen make special arrangements for us to pick up our drop bags.  Many thanks.
Also so much appreciation to the many volunteers that gave up their day and night to help us achieve our dream of completing Tuscobia 160.
Thanks to the communities of Rice Lake, Birchwood and Park Falls for your support of this event.  And a special thanks to the other racers- your "hello" and "good job" as we passed in the darkest hours of the night and conversations at the checkpoints were a constant encouragement.
at 12:43:00 PM