Our Visit to Victoria, BC

Triathlon brought us to Victoria but we left with far more. Victoria is a smallish city with a outdoor, classy style with a bit of artistic vibe thrown in.  It is really easy to get around and has amazing history and architecture.  There is clearly a British influence as many buildings have a European look to them.  There is a lot of modern influence as well, and many multi million dollar gated estates.

Great restaurants with amazing seafood.  I ate salmon, halibut and other local fish every chance I got. The beauty of the area is spectacular.  And I really mean spectacular.  It has it all; mountains, lush vegetation, trees, amazing flowers, ocean views at every turn.  Amazing.
Can you see the hearts in my eyes?
Looking forward to returning someday soon.

Here is my rambling recap with coles notes at the end so you get to choose.

Thurs morning we left home at 5:30 am, drove to Saskatoon to catch our flight to Calgary then to Victoria.  Arrived early afternoon local time.  Flying is amazing!  It would have taken us almost 3 days to drive this distance.  Got checked into our hotel Cherry Tree Inn.  Just a small, family run hotel with no bells and whistles but was very close to Elk Lake where Ironman Victoria 70.3 was occurring. We really believe in staying as close to the race venue as possible.  The times we have had a long distance to drive from hotel to race was really tough.  Though this hotel was clean, affordable, had a fridge and microwave, it was very small and sparse and I would only recommend this if someone was coming to race the triathlon.  If you visit to Victoria is a holiday, stay in the downtown area not here.

It was a last minute (meaning 1 1/2 days prior to leaving) decision to rent bikes while we were there instead of bringing our own.  Haven't done this before but we were really pushed for time and basically got our packing done after supper the night before we left.  Terry just finished seeding that day so taking the bikes apart, packing them in the bags, hauling around to, through and from the airport, re-assembling then doing the whole thing over again on Sunday after the event was just too much to handle this time.  Plus, for us who are geographically challenged with limited resources, the bikes are never quite exactly the way they were when we put them back together again and there is no bike shop close by to help us out with the small adjustments.  A real pain in the butt.
So pedals were the only thing coming.  Didn't even take our own saddle, though we considered it.  Tried to keep things easy.

Had our first glimpse of downtown Victoria as we drove to pick up our bikes.  I loved the drive through China town with the hanging lanterns on all the streets.  Wish I could see it in the dark. 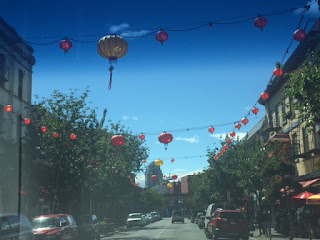 Rented our bikes from a North 48 Bike Shop which specializes in bike tours.  We had excellent service with David Ley, the owner.  He wanted our measurements from our road bikes and he set up the rental bikes according to these measurements.  Not exactly like your own but at least adjusted to fit better.  Saddle did feel different and I was wishing that I brought my own, but it didn't take long and my butt adjusted.

Loaded the bikes up and went exploring the downtown area on foot.

Fresh seafood at Earl's on their outdoor patio, a quick stop at the grocery store for a few essentials then to the hotel to settle in. 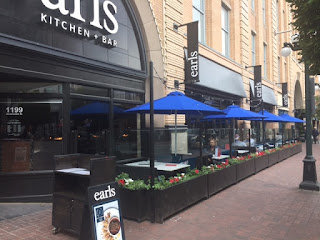 With the 2 hour time change, we felt ready for bed early in the evening.  I knew that we would wake up super early so heading to bed sooner than usual tonight was perfect.

Indeed, we were up at 4 am and hit the roads not long after with our runners on to explore.  Our goal was to find the easiest way to get across the main highway to Elk Lake on the other side.  We wanted to run on the path around the lake, which was the triathlon run course.  Found our way to the beach then continued to run on the path around the lake.  It was almost magical with tall, towering trees, deep and thick foliage, ferns everywhere, constant glimpses of a breathtakingly calm lake.  I loved every minute of it.  I think when we set out for the run, both of us were thinking around 4 miles maybe 5.  Finally called it at 8.  Just having too much fun. 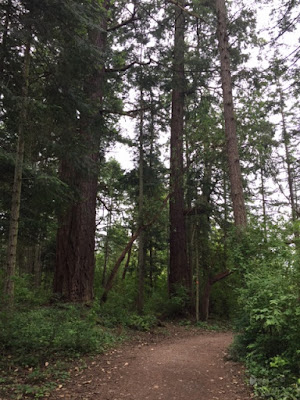 Cleaned our selves up and set out to explore again, this time on 2 wheels.  We took the Lockside Trail to downtown Victoria.  It is a trail that travels both streets and trail with a couple traffic lights but a mostly straight through journey to downtown.  We found a Starbucks and had our usual; 2 plain oatmeal, 1 coffee, 1 peppermint tea. 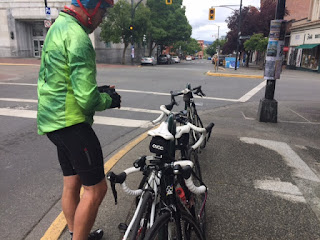 I had an appointment for an hour and Terry went exploring.
Lunch was on the patio of the Days Inn restaurant.  It faced the harbour so the views were awesome. It is a cool corner right in the heart of the downtown area with the harbour on the west side of the street, the magnificent Embassy Hotel on the east side and the Legislative Building on the south.

The entire afternoon was spent touring around, following the scenic road (Beach Drive) from the downtown area through James Bay and around the east side of the island.  We had ocean views 80% of the time. 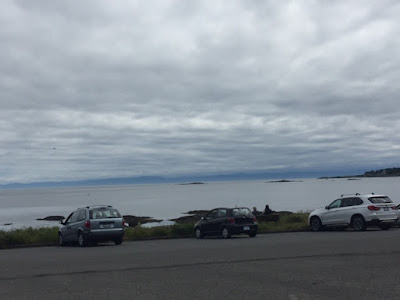 It was spectacular.  Lots of parks, 2 harbours, the ferry station, residential areas with gated homes.  Tea at Starbucks a time or two and many bathroom breaks from too much peppermint tea. 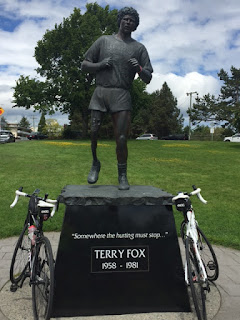 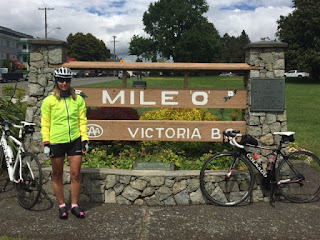 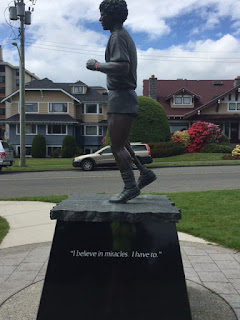 We went straight to Ironman Victoria check in and got ourselves registered.  There was very few exhibitor booths set up but we checked them out and listened to a speaker talk about having a successful swim event. 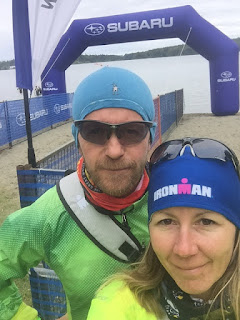 Headed back to our hotel to clean our selves up then grabbed a burger from Boston Pizza. We had an errand to run on the west side of Victoria toward Langford.  Lots more hills and rocks. The mountains of the USA seems so close, only  a few miles to the south.

Saturday morning included another early morning bike ride with plans to go directly to the event location to drop our bikes off for the mandatory bike check in.  Breakfast was at Starbucks again though a new location.  We biked part of the triathlon bike course that took us back into transition.  Lots of athletes riding the same area we did.  It was quiet country type paved roads, narrow and rolling hills.   I realized we didn't put our stickers on our bikes.  So back we went to the hotel to sticker our bikes, and helmets. 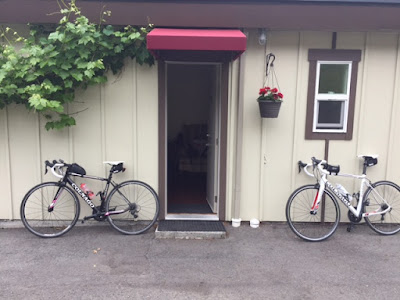 We walked the 2 miles back from the transition area to the hotel then showered up to go have lunch.  Bought a few groceries and decided to drive some of the bike route which went from Elk Lake, north to Sidney and along the west side of the peninsula before heading back to Elk Lake.  A very nice scenic route with coastal views.  Took a couple hours by the time we made some stops but it was perfect for some of the afternoon. 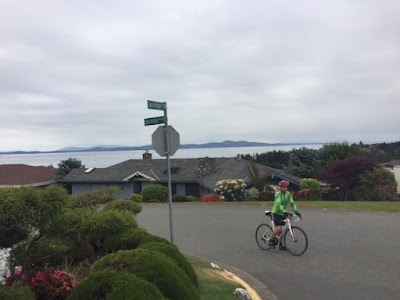 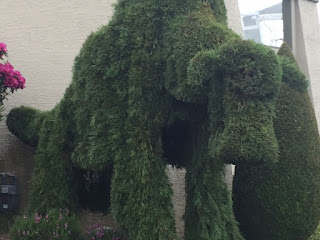 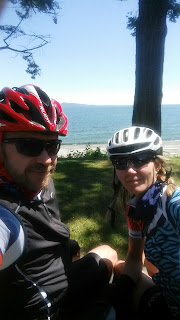 Got everything set up and ready for the triathlon.  Pasta for supper and feet up for the evening.  I wasn't feeling so hot and was getting a bit worried about how my body was going to handle the triathlon tomorrow.

Alarm at 4 and first thing my husband said to me was that he thought we shouldn't go to the triathlon.  There have been a couple events that have had undesirable weather conditions or other tough issues that have given us a moment of thought of not participating but never before have we seriously considered it.  But truth be told, after 10 min of discussion with the premise being that we were both worried I would get really sick, it was decided to go pick up our bikes and have our own day.  I was ok with spectating while he participated but he said it wouldn't be the same and he wanted to spend the day with me.  Couldn't argue that.  I was both relieved and disappointed at the same time.  My heart and body were both talking to me sending opposite messages.  Which do you listen to?  In the end, health is more important.

So, walked to transition and picked up our bikes just as the triathlon was going to start.  We started biking from there, making a big circle from along the coast to the downtown area and across the harbour bridge and back up to the Elk Lake area.  It was so wonderful to bike a huge part of the day, touring around, stopping when we wanted to and just enjoying the ride as tourists. 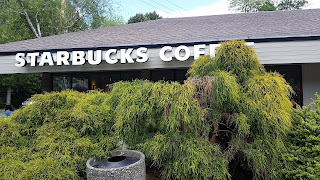 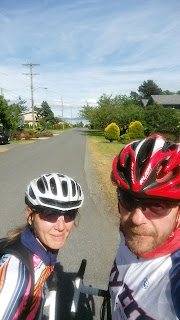 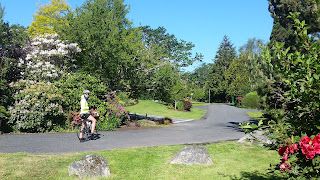 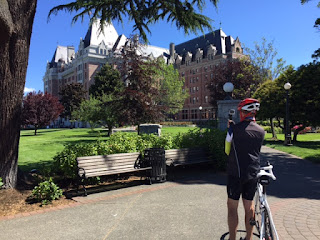 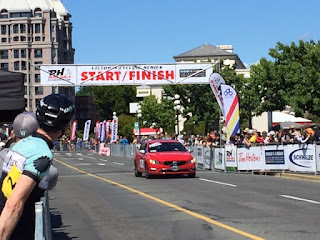 We came back to the downtown area to return the bikes and for supper (our last fill of fresh seafood) and overheard a lot of triathletes (also eating) about how great the course/day was.  I was so glad for them.  I hope I can come back sometime to complete unfinished business.

Monday morning we were heading back home.


Coles notes version of Victoria - you should go!! like now!!

-very scenic and totally worth visiting
-it has the tropical plants and flowers like California but the coniferous trees of Canada with cedar trees, mountains and of course the ocean
-weather was challenging for me to dress for; hot when you weren't in the wind but needed a sweater or jacket in the wind but lots of people were wearing more "summer wear" I guess more adapted to the wind/sun hot/cold thing
-we were only there from Fri- Mon but visiting at this time of the year (beginning of June) we had cloudy weather each morning with possible mist and a bit cool 7 C with more sunny skies in the afternoon and temp around 17 C
-I took a windbreaker and arm warmers for biking and used them every time I was on my bike and only took the windbreaker off once
-we stayed close to the event at Elk Lake but most people choose to stay in the downtown area and I would also do this when I return again
-rent a bike and hit the trails; there are too many paths and too much to see to not do this
-eat the fresh. local fish -  like lots of it
-walk around downtown, the harbour is very cool, many places to window shop or spend some money, very interesting architecture and waffle shops everywhere
-didn't see an ice cream shop anywhere we were
-we had wondered if we could get by without renting a vehicle and though Victoria is only 26 kms away, it would be very difficult to just go with a bike but buses run every hour back and forth and it is an hour ride between the 2 so that is doable
-we considered taking the ferry and going either to Olympic National Park, Oregon to the south or Salt Springs Island to the north but needed another day or two in Victoria to make it work, $2 to take the ferry on the bike