Sunday, March 19, 2017
We flew into San Diego on Friday, March 17, picked up our vehicle and got settled in our rented condo in Oceanside late afternoon.  Terry and I unpacked our bikes that evening and got a decent ride in the next morning to ensure things were working well.  Mine needed a couple adjustments to the derailer.  Getting a bit better at this packing and unpacking business.
We drove back to San Diego over the bridge to Coronado for athlete check in.  It would have been very nice if we could have checked in the next morning before the event but unfortunately we couldn’t.  The drive was really nice and it was great to see where the event swim/bike/run was going to be. 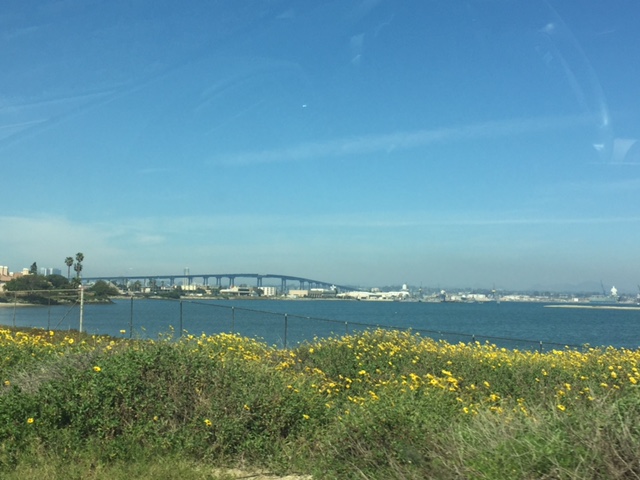 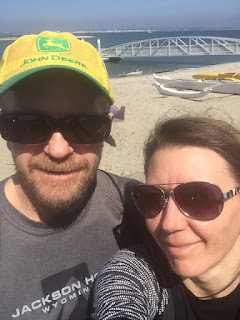 The really early morning and busy day prior just had us wishing we could have had a quieter day today.  All was good though.  We only spent maybe ½ hour at the check in as there was no expo with booths just the check in. 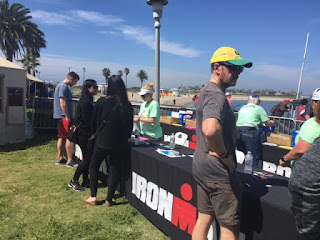 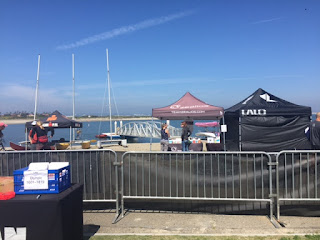 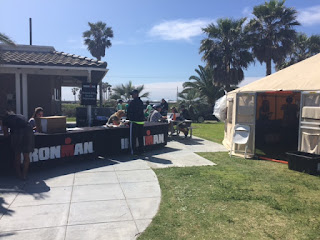 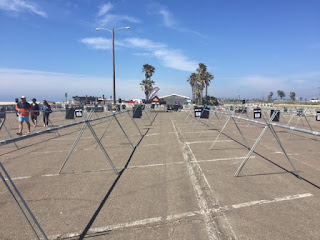 Another early alarm for Sunday; up at 4 am with plans to be on the road by 4:45.  It was closer to 5 when we left;  not from disorganization as we had set our stuff out the night before, I think we were just tired.  Hard to get up.  Just over 1 hour of driving and we parked and rode our stuff to transition.  It was still dark and pretty warm +14 with little wind.
Transition became more of a rush than anticipated as closing time was now moved to 6:30 instead of 6:45.  Our waves were 6:55 (Terry) and 7:05 (mine).  So a quick set up, tires pumped and off to find the water start.  The transition area was in a parking lot on the west side of the highway by the ocean and we needed to cross the highway by way of an underpass to get to the east side of the highway  by the harbour where the swim was.
The swim was a 1500 m swim in the Silver Strand State Beach Bay which had amazing views of downtown San Diego.  It was calm and pretty warm.  They announced water temperature was 63 degrees F (or 17 C) on race morning. With the wetsuit, it was the perfect swimming temperature in my books.
The course was very well marked with red buoys showing a turn and yellow/orange buoys to use when sighting.  It was a clockwise swim.  There was no warm up swim so going in cold was a bit of a concern but at no time that morning was I cold or chilled so I knew that would be to my benefit.
The wave I was in was the last wave of the Olympic distance which I liked knowing there was no pressure that I would be cramped by upcoming swimmers.  Still, all it took was a couple mouth/nose full of water and I was sputtering and gasping.  After having a couple swim starts (in the past) with bits of an anxiety attack, I was fighting hard to not get caught up in one.  Telling yourself to calm down a million times does work eventually.  Anything new with a swim and I get in a fluster and this time the salt water did it to me.  Within minutes I was fighting a revolting stomach that didn't apparently like the inclusion of the salt water to race day nutrition.
But the 1 thing that up until this day has never failed me is the reminder that nothing feels good for the first 20 min.  I just needed to concentrate on getting through that and it seems my body finds its rhythm and stops freaking out.

So my rhythm was found and it became very enjoyable.  I hated to be finished if truth be told.  You might have though I was crazy before but that confirmed it didn't it. Swim 38:38.

I was a bit of a run to get to transition (as it was on the other side of the road).  I didn't dawdle but I did make sure I did everything the way I wanted to.  Wetsuit off, a quick dry off, sat on my towel to dry my feet and put socks and bike shoes on, helmet and sunglasses on and off I went.  T1 6:33

The bike is a glorious 2 loop course along Silver Strand Blvd.(highway 75) that offered amazing views of the ocean, downtown San Diego, the harbour and Coronado.  It was a flat course.  I enjoyed every moment.  There was so much to look at.  I passed hubby as I was 1/2 was through the first loop and he was just starting his second.  Didn't expect him to see me and he didn't. He is a heads down, game on, focused to the max rider.  We always compare experiences and the things I see that he didn't is unreal.  His time is always way better than mine though. 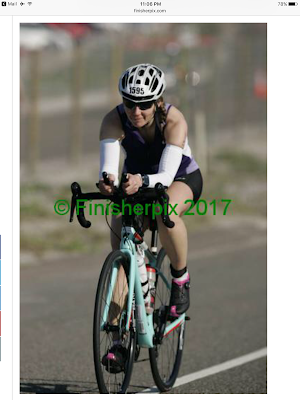 I had 1 bottle of UCAN with 2 scoops of powder on the bike as well as my front xlab hydration bottle with water and NUUN.  I refilled water once at an aid station.  I also ate 1 payday snack size bar.  1:25 bike done

The out and back run was  along a paved path beside the highway.  The first quarter of a mile was along a dirt path with some sand but the rest was on pavement.

There was an aid station at the mile 3 turn around point where I drank some gatorade.  My goal was to really push it.  I wanted to hold around an 8 min mile.  It was sunny and warm but nothing crazy.  I felt like I was passing everyone that I came up to.  So many stronger swimmers and bikers and with being in the last wave, there was more people in front of me than behind me.  I was happy with my effort with the run.  51:18 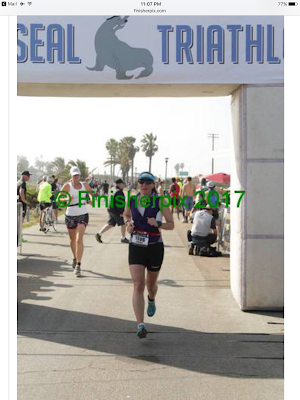 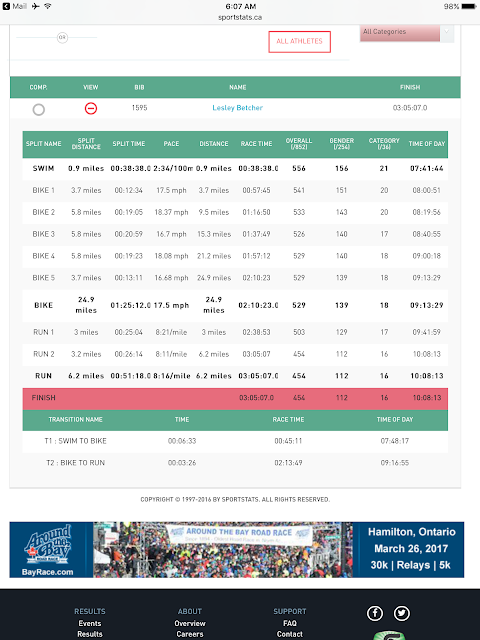 Superseal website showed just under 900 registrants so it is a really nice early season triathlon without an overwhelming number of athletes.  It offers both Sprint and Olympic distances, has amazing views, a great swim, fast bike and nice run course.
Truth is, I would never have gone in this triathon had it not been partnered with Oceanside 70.3 and though it was a bit tight arriving in San Diego on Friday and having the triathlon on Sunday and I was a bit tired, it was totally worth it and a lot of fun.  A great warm up for Oceanside.

The most inspirational part of this event however, was the fact that it is held at the birthplace of the Navy Seals and throughout transition, there were huge banners of fallen seals that were being honoured. 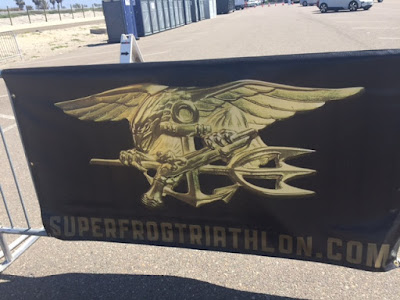 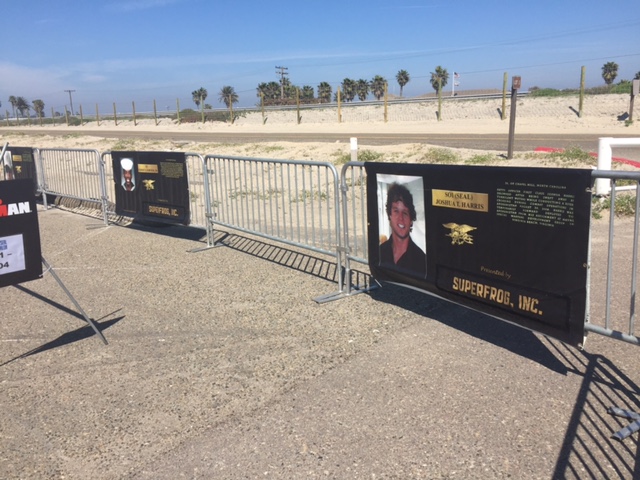 A lot of times I think "oh ya I will totally do ______ again" and don't take the immediate experience and appreciate every moment of it.  I think I will have more and more chances, opportunities etc.  But the timing of things doesn't always work and I am trying to enjoy every moment and not take anything for granted.  I certainly appreciated and enjoyed this event.  It was breathtaking and a lot of fun.  I encourage you to try it out if you are in the area.