Saturday morning we set off around 10 am on what we believed would be a 6 hour ride from our house to our family cabin at Wellman Lake.  Estimated distance 35-40 miles on a hard snowmobile trail with some elevation gain. 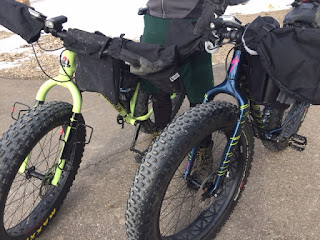 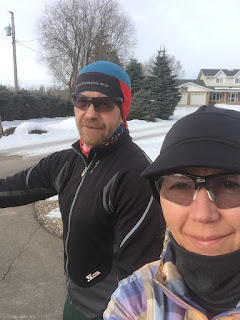 Somehow, we got 1 day of warm, chinook like temperatures sandwiched in between seasonal temperatures.  High today predicted +5 C.

Gravel riding for 8 miles then on the snowmobile trail.  Smooth riding for a couple miles till we hit a field with very little snow on it.  Very bumpy, rough trail for a mile.  Slow riding but thankfully, still frozen so at least it wasn't slow and muddy. 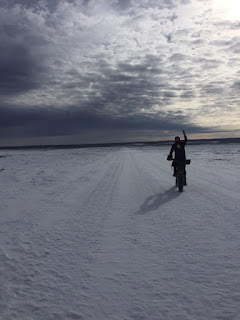 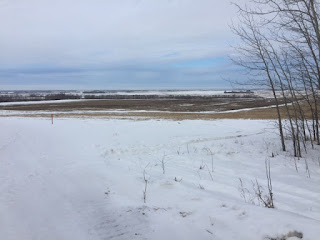 Stopped at the trail head going into the bush and removed our coats, had a drink and quick bathroom break.  It is amazing to think we could ride in thin, long sleeve shirts in March. 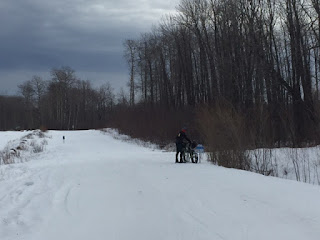 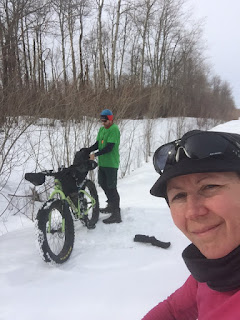 Reached the warm up shack a few miles in and stopped briefly for a picture and drink. 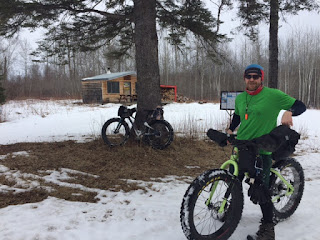 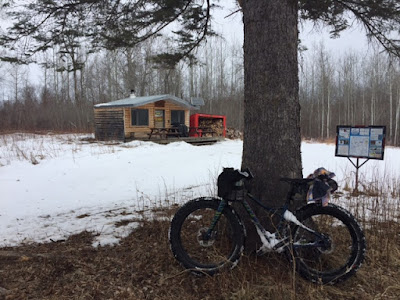 The trail was amazing.  So beautiful as we would cross over swamps with lakes beside or through a bluff of towering poplars.

The trail also took us through thick spruce trees, lining each side so close you couldn't see one without another. 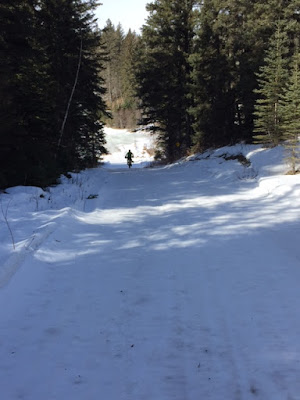 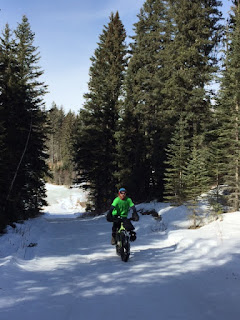 The climbing was constant and not so steep that you huffed and puffed but steady enough that the legs got little rest.  And the kicker was that as the day went on and the temperature increased, the down hills became a bit more difficult as the snow was getting softer.

Evidence of one of my down hills. 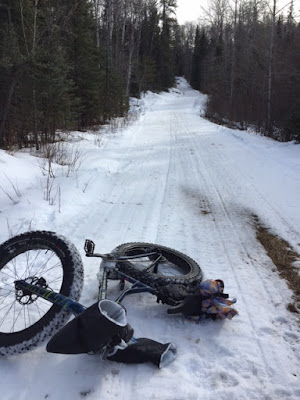 We didn't have a time schedule.  We stopped when we wanted to eat or drink or take pictures.  I saw a couple deer but no other wildlife. 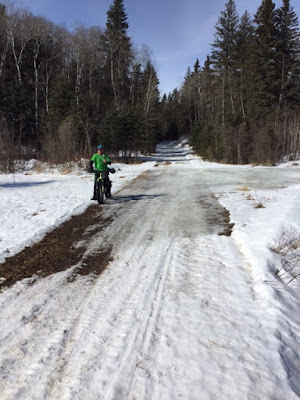 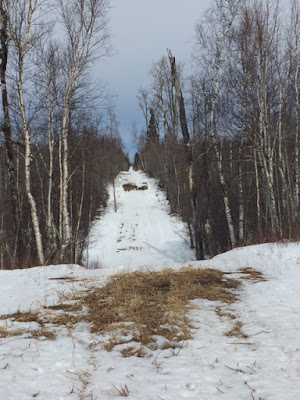 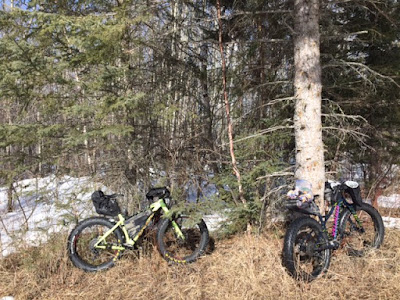 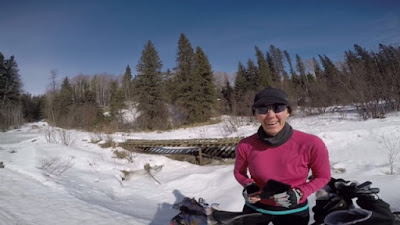 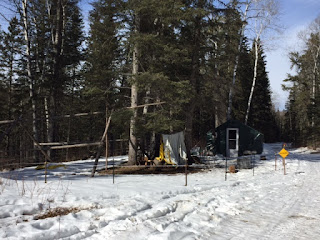 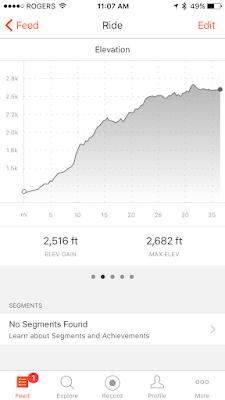 The trail took us out to the main gravel road to the lake and we tried to stay in the ditch on the snowmobile trail but it was just too soft.  So we went on the road and did our best to stay out of the mud.  The main road takes you right to the lake or you can take a side road which loops around to the cabins on the north/west side of the lake.  We did the cabin loop.  1 mile back on the groomed trail then we were at the lake.

What we carried with us:

We each carried a bag of trail mix in our pocket and a couple snickers bars.  I carried the rest of the food in my front pouch beside my Nalgene bottle.  Terry had his Nalgene bottle and the tea hydroflask.
We didn't eat all our food, had a bit too much maybe but it was ok having a bit left over.  Debated about whether we should take 3 or 4- 32 oz bottles of fluid.  Decided on 3 but could have used 4.  If it was colder we probably wouldn't have drank as much but we drank our last bit of fluid when we reached the road (about 6 miles) before the lake.

I had a spare shirt and socks as well as a light insulated jacket (North Face Thermaball).  I also always carry a small bag with an assortment of survival type items (compass, survival blanket, small pocket knife, bandaids, C02 cartridge, matches, tums)
Terry had the same change of clothing but instead of the survival bag, he had a few more tools in case of a flat.

We both had a lightly padded short (triathlon shorts).  I had a light soft shell type pant on top, Terry had a pair of running tights with another pair of shorts on top of that.  We both had long sleeve merino wool shirts on.  I wore thin mitts, he gloves.  Both of us spent a lot of time with the hand wear in the pogies.  Buff, head cover, merino wool socks and keen winter hiking boots.  Windbreaker jackets.
Though it was pretty warm, nothing was wet on me.  We both agreed later that we should have put our windshells back on once we got on the gravel; both to protect from the mud and because it was less sheltered and a bit cooler.
Obviously, this ride had unusual temperatures but I probably wouldn't do much different in the way of dressing.

All in all, this was a very doable activity.  It took some time but we doddled and took breaks whenever.  It was meant to be a full-day experience instead of a race to get to our destination.  We planned to enjoy the journey.   We seriously considered riding it back home the next day but it didn't work out due to time issues.  Our forecast on Monday was for a big dump of snow so being able to do this ride pretty much with ideal conditions was so awesome.

It also confirmed that the fatties can ride the snowmobile trails pretty easily.  Of course, we had the trail to ourselves but we would hear if a machine was coming.  Isn't is lovely when traffic is not an issue.

Our girls drove up and arrived just enough before us to light a fire and unpack a few things.  Pizza (they picked up) was waiting for us with some warm tea beside the fire.  It was heavenly.  Pizza rates pretty much #1 on my scale for food after activity.  The first 3 small, corner pieces (the very best)  I barely tasted, the next 2, I enjoyed.

So how did I feel?  I was pooped but happy.  It was a real good workout on the legs.  More than you would think 35 miles would do.  I drank a lot of water and tea to rehydrate.  Ate some grapes and homemade trail bars.  Enjoyed our time watching hockey and singing crazy songs with the girls.  Had a great day!!

The next day we ran almost 11 miles on the snowmobile trails by the lake and around the cabin loop.

SO, the point is- you don't need to travel to somewhere exotic to have great adventures.  A lot of the most memorable experiences happen in our own back yards.  Travel by foot, ski, snowshoe or bike but get outside and do something cool, something unique and something that challenges you and maybe even puts you a bit outside your comfort zone.

And, if you are ever interested in joining us for a ride to the cabin, let me know.  Pizza and crackling fire thrown in.
at 7:06:00 AM