I have been rethinking my definition on what constitutes a tragedy and a hero.

Tragedy as we would typically define it has affected us this summer as it may have also for many of you.  My brother in law who was only 56 passed away in August as well as my cousin's son who was 17.

My brother in law has had an addiction to alcohol for at least 10 years.  This addiction took him away from his wife and child and led to estrangement between both extended families.  I know without a doubt he loved his family but the disease pulled harder.  We always hoped he would hit the bottom and change his ways, but unfortunately, it didn't happen soon enough.
In just reading a post from swimbikemom, Meredith has applauded the courage of ABC News Anchor Elizabeth Vargas on sharing her story with addictions publically.  Read Meredith's post here and read Elizabeth's story here.   Both these ladies are not only fighting their demons but also want to build the courage in others to fight theirs.  Not only fire fighters are heroes people.

With a personal history of alcoholism in the family (dad and grandma) I wish they would have been that kind of hero.  As long as we keep the money coming in, as long as the family is properly taken care of, what's the problem with a drink or 2 to wind down.  Isn't this a typical suburbia take on NOT being an alcoholic.
I have very clear opinions about alcohol- and me.  We don't get along.  I saw too much and just don't ever want my kids in that situation.  It like a weasel and worms it's way into a person's life and gets hold and won't let go.  The number of lives that have been changed for the worse by alcohol is a tragedy.
Alcohol is everywhere though.  I've read a ton of race reports where people talk up the great beers at the end of the race.  Heck, on the course of Challenge Roth in Germany, racers were offered beer from the spectators.  What other people choose doesn't bother me one bit and there is no judgement.  I just think it is a bit sad that alcohol finds it's way into everything.  Guys play hockey and then have beer in the dressing room after.  Hard day at work and it's a glass of wine to relax.  Run an ultra and get rewarded with a beer that night.  It's alcohol and I that have a difference of opinion not the people who choose it.
But I do have to say with all the possibilities of heroes in the world, anyone who find the courage to walk away from something that weasels a grip hold on you- well you are my hero!

A loss of life in the physical sense is certainly a tragedy.  I really struggled after attending the funeral of my cousin's son.  A young life cut short by a terrible accident.  Tragedy.  But then how about my aunt and uncle who have had marital troubles for more years than I can remember.  Their lack of love, coldness toward each other, the pretense that everything was alright.  Tragedy also.  How about my other aunt and uncle that are struggling with his progression of early onset Alzheimer's.  How they have to move to another, smaller house.  How he can't go anywhere on his own without her, and especially how after only a couple years after retiring, their dreams and plans have been irreversibly altered. How hard it must be to deal with the disease, the disappointment but also grieve the loss of a relationship as you have always known it.  Tragedy.


Tragedy comes in many forms, stealing and plundering all it can.  Some can not be controlled but what about what can be influenced, changed or prevented?  Are we working hard on ourselves to be the best we can, to live life to the fullest.  Do we treat those we love as treasures that are irreplaceable and so very valuable?  Do we try to touch others with words of encouragement, hope or concern?  There are SOO many ways we can influence and change the course of what could be tragedy.

I used to think when I was a little girl that I wanted to do something that would change the world, something big.  I wanted to be a hero in some way.

But I have learned that the constant repetition of little things that are good, thoughtful and caring are what actually make the biggest changes in lives around us including our own. 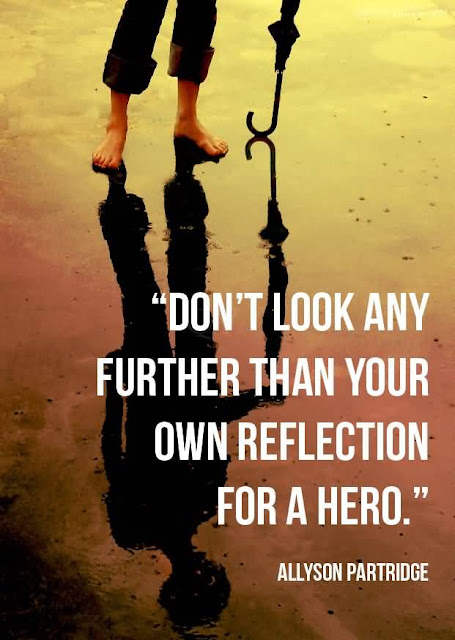