Challenge Roth- The Beginning and Tips

Gosh Roth- how do you write a post trying to coles note version one of the most amazing experiences of your life? Besides the day I got married and the days my kids were born, this was the next best day ever.  Really, no lie.

Just a few stats to set the stage. Jan Frodeno was not only racing that day but had a goal to beat the record time by Andreas Raelerts set 5 years ago.  Then a couple weeks before race day, Daniella Ryf was added to the lineup.

My husband was originally the one interested in applying into the Challenge Roth lottery in July of 2015.  He had the computer loaded and ready at some crazy early time (because we are 7 hours behind Roth).  In 30 sec his name was accepted and he had 2 weeks to leave payment.  Those lottery spots were gone in less than 2 minutes.  I had not completed a full distance triathlon yet and sometimes I spend too much time "thinking things through" and he is a let's jump and go type of guy so he was in and I wasn't.  Additional lottery spots were available the beginning of December.  I was out of town and well, it didn't happen as planned and I didn't get in.  This time I was really bummed.  But a most amazing thing happened in a very early morning in Feb of 2017.  My husband whispered to me that he was just got an email indicating that a few spots were available for Roth, did I still want a spot.  Well, I jumped right up and told him to say yes, checked my email a bit later and there I was. 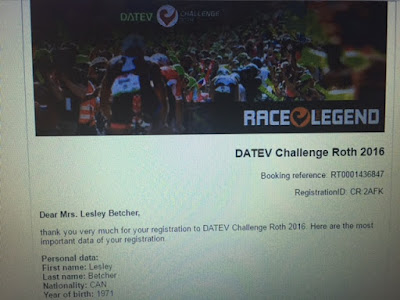 I had plans for July 17!  Next step was the training.  Planned back 20 weeks and the first day of training for Challenge Roth officially started on Feb 28.  I already had a couple events planned for 2016 and timing wise they all worked well together.

We also starting doing some research and making some plans and reservations for the trip and accommodations.  We got great Challenge Roth advice from meeting up with a social media friend Erin Lee the previous July at Whistler during Ironman Canada.  She had just returned from Roth and had some great tips for us.  I think she was the ball that started all this rolling.  Thanks Erin!

Roth is a small community with limited accommodations.  There are however, many other neighbouring communities as well as the city of Nuremburg all within about 20 miles. We booked a small condo through VRBO on the south side of Nuremburg (Roth was south of Nuremburg).  The condo had comfortable beds, enough space for the 4 of us and our bikes and gear, had a washing machine and small kitchen.  It was very simply furnished though, not like maybe we see in North America.
We did do lots of walking in the area as we were just on the outside of the old city walls and the walk to the old downtown area was beautiful.  The drive back and forth to Roth was a real inconvenience though.  We drove there Thurs, Fri, Sat and Sun.

To do it again, I would recommend trying to book a place in Roth.  Obviously, it is nice to be close to the race finish/expo but more compelling is the feeling Roth gives off.  A quaint, traditional German (and of course after being there once, I am the expert) with classic German architecture and charm, cobblestone streets, neat restaurants and pubs with unfortunately little chance to experience them.  Also, if you enjoy the ambiance of the days prior to a triathlon, Roth is a better bet.  We had none of that in Nuremburg.  People on bikes commuting but no signs, promotion or in some cases awareness of Challenge Roth.  However, a mere 20 min away, the people of Roth are well known for their passion for triathlon.  Just seeing the number of spectators confirms this.

We chose to fly into Zurich as we were going back to Switzerland for the 2 weeks after Roth to see friends and attend a wedding.  We rented a car at the airport and drove the 3 1/2 hours to Roth through rain with very little sleep.  Most flights from North America to Europe will fly through the night so you arrive in Europe in the morning local time though it is the middle of the night to your body.  The trick I was told was to just stay awake for the day and proceed as normal to get adjusted to the time change.  We really did try to do this but did make a pit stop 2 x at rest station pull outs along the German roads.  The second time, with the 2 kids sleeping, I told hubby just to put his head on the steering wheel and let's catch a few winks.  We all slept 30-40 min then were good to go.

Most people from Canada that we met through the few days, also there for the triathlon had also flew through the night, rented a vehicle and were staying 15 min away from Roth.  We all agreed that our bodies finally started cooperating with the time adjustment after 4 nights.  Slept good the first night-obviously too tired to stay awake but despite busy schedules the next 3 days, our nights weren't full of sleeping.  No funny ideas either.  We did spent one night one by one hitting the kitchen up for some food around 1:30 am.  PB and J sandwiches with amazing European bread hit the spot.  I could write a whole blog about European bread.  There are no words to describe.  Also, no words to describe me trying to buy bread from a small mom and pop German bakery with my usual 100+ questions when I speak no German and the lady spoke no English.  I could hear them laughing as I walked down the street.

I digress.  Tips.  We were there obviously for the triathlon but didn't want to neglect exploring Nuremberg and the surrounding area.  As Nuremberg was the headquarters for the Nazis during the World Wars, it was attacked frequently and the destruction was evident after visiting the Imperial Castle. 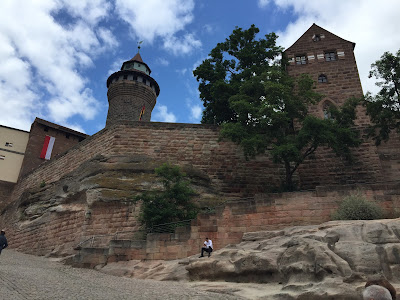 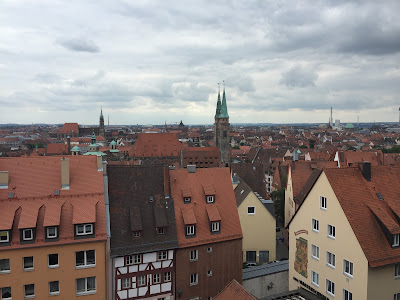 We also went to the Trial Museum which took us on a self discovery tour of the crimes and trial of the German soldiers and political men responsible for the decisions to attack,imprison, kill and attempt to wipe out the Jewish people.  Very difficult to see but so worth it.

We walked the many pedestrian only cobblestone streets in the old town, crossing old bridges, buying local produce at a daily farmer's market, trying new foods (hello bratswurst) from small German restaurants with no English.  Many very old churches that take your breath away. 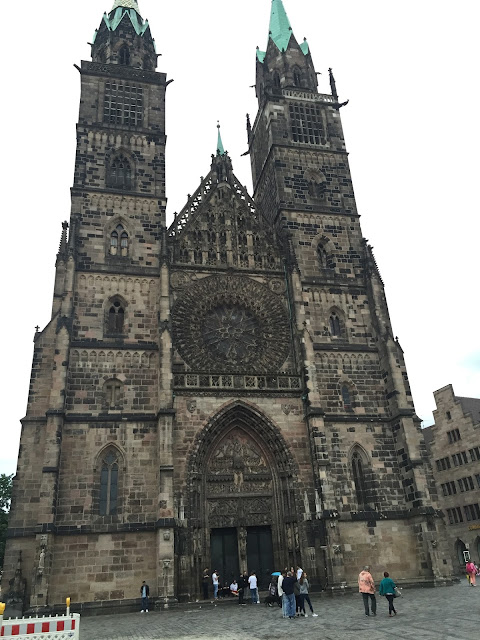 We also biked around the old city on a wonderful pedestrian, cyclist path.  Many people do ride commuter type bikes and bike lanes are pretty common in the city. 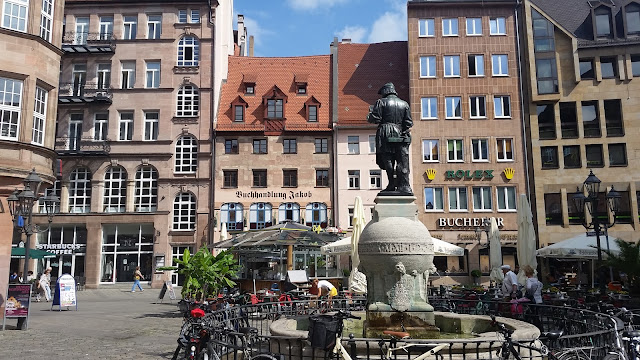 We were told about Germany being a beer lovers haven, which was true but didn't know that it was also a smoker's dream.  Cigarettes were very cheap and all outdoor patios had ashtrays. It seemed everyone and their dog smoked.  And smoked everywhere doing anything- walking, eating, working, biking.  We had the chance to sit outside but rarely did.  It was just too much.

Interestingly enough, I always felt safe while in Germany.  We walked, ran, biked and came in with our vehicle many times after dark and I never felt unsafe.  Unfortunately, only a few days after the triathlon, Nuremberg and other cities in Germany were subject to scary terrorist type troubles.

Being able to race at Challenge Roth was truly an opportunity of a lifetime.  With the lottery system and the cost to travel abroad, it isn't the easiest to just put on your calendar and do.  But man, the memories.  This is what life is about people.  Crazy, wonderful adventures in new places, meeting new people and having the time of your life doing it.
Sign up for Challenge Roth.  You won't ever regret it. 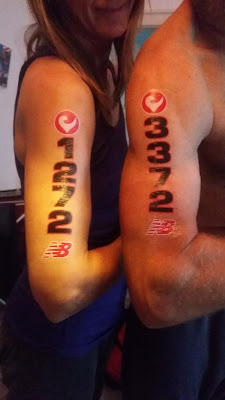 What do you think the chances were of us sharing the same last 2 numbers?  Truly meant to be!