The Journey of the Long Run

The long run takes on different forms, purposes and execution for every runner.  But in truth, the long run is similar to the journey of life for all of us; one foot in front of the other, mostly moving forward at varying speeds.  There are times you feel good, times you want to throw up, times you want to quit and times it seems you can go on forever.

My long run are usually always run with my husband aka roaringrunner.  Sometimes we run the entire time in silence with the exception of an occasional "Doing good" usually followed by a grunt. Some runs are spent getting everything out on the table that we have each had to deal with that week. We find solace, peace and healing in the miles despite the weather conditions or the problems that we are dealing with.

I think this is similar with most people.  Running makes you free.  The fact that running can often take on different forms is what is the best part.  There is and there isn't predictability. It become what you need and fills the tank that is the lowest.  It never lets us get to full of ourselves and keeps us on the road of learning.

My long run 2 weeks ago was a bit different.  It had been a big week.  In reality, when are they not? Besides the regular, there was a few more things on the table to deal with.  A trip to the hospital may or not have been on the schedule. 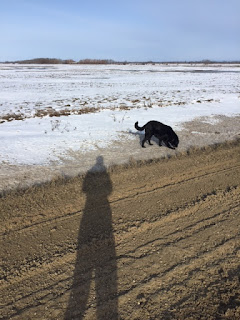 Me and my only running partner today. 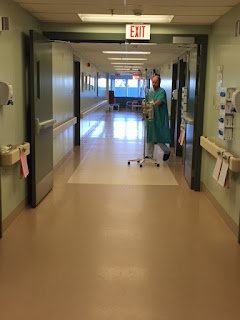 Though I really needed a run, it was hard to enjoy it as I felt selfish guilt for running when he couldn't and I knew how badly he wanted to.  A week of pain, sleepless nights and chaos in the house resulted in emergency appendix surgery on a perforated appendix.  He didn't stay in bed long though- was up and about and making laps a few hours later.
His first question to me in ICU after major heart surgery 5 years ago was if he could go for a run now. (He couldn't run for 5 months prior)  This time in ICU, the first thing he said was that he loved me.

We truly don't know each and everyday how things will work out.  I wish that all the hours spent sitting in the hospital or in the vehicle driving (surgery was 2 hours away each way x 3 days) were actually spent on my bike or running, with my kids or experimenting in the kitchen but this was not the case.  Life is precious, lessons come in varying experiences and none of us are immune from interruptions from injury, surgery or life events. We get so caught up in the routine of life that sometimes we forget to appreciate.

Roaringrunner has encouraged me to continue training hard and not to feel bad that he isn't able to.  I know it won't be long and he will be crushing things again.