A couple of my kids and I headed to the cottage at the lake last Tuesday night along with a friend who is visiting for a few days.  A light brushing of snow was on the ground and the trees on either side of the road glistened and sparkled in the lights.  Snow always has that effect on me; magical.  The cottage was very cool inside.  Half hour later we were huddled on the floor in front of the roaring fire in the fireplace with blankets all around us, eating nachos and cheese, playing a mean game of skipbo.  Might be one of the best memories of the time there.  The simple things get you every time.
The next morning I went for a run on the snow covered road, doing the 6 mile loop that circles the cabins on the other side of the lake.  The clouds were so thick and close I think I could almost touch them, not a breath of wind and trees full of frost.  My favourite kind of winter mornings. Complete silence with only a deer to keep me company.
A hike to the Copernicus Look Out followed after brunch.  A 1 hour round trip hike taking us up a pretty steep trail to a lookout tower with a view of the lakes around.  Spent a fun 1/2 hour at the top talking and comparing who's phone had any reception.  Brace yourself for what I am about to share: yes there are places in this world where there is no cell phone coverage.  The lake we go to is one such example.  We thought to check though since we were so high up.  Had fun trying to text each other up there. 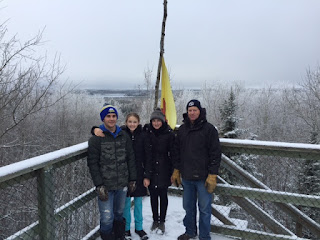 The next adventure was kayaking.  There was ice for about 30 feet along the shore so it took some fierce paddling to get through but wow, what fun! 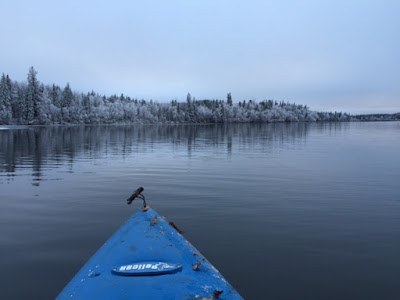 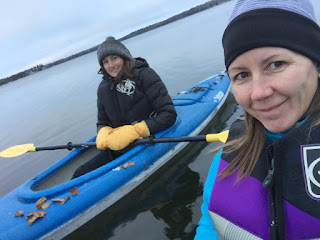 Rounded the day off with pizza for supper then unfortunately had to pack up and head back home.  It was a great way to spend a day off.

The privilege of being in such a great place in this wonderful country was not lost on me this Remembrance Day. So thankful for those who have made this freedom possible.